In this lesson, we looked at different definitions of tragedy and how they have changed over time.

We began by recording our own ideas on tragedy and the tragic hero. We then discussed how Aristotle outlined his rules for tragedy in Poetics, looking mainly at the interplay between action/plot and character. We learned how Aristotle showed that tragedies usually involve kings, whose tragic flaw (harmatia) was usually pride. He explained how these characters were generally moral people who behaved nobly. He wanted the heroes to learn from their errors and by learning, become more complete characters.

We then discussed Freytag’s Triangle: 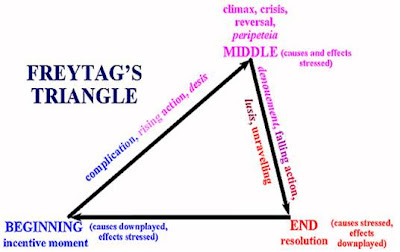 Most of the lesson was spent reading Miller’s essay “Tragedy and the Common Man”. We began summarising each of the 17 paragraphs into one sentence:

Summary of Miller’s 17 paragraphs in his essay “Tragedy and the Common Man”.
1) In the modern world, “tragedy” is seen as irrelevant to our lives.
2) However, the common man suffers the same things as ancient kings used to.
3) That’s why everyday people can understand a tragedy about a king.
4) Someone who always strives to gain his rightful place in society (even on pain of death), could be said to be a tragic hero.
5) Tragedy is, therefore, man’s need to measure himself against what he sees as fair.
6) The tragic flaw of a character is this unwillingness to accept the unfairness put upon them – and this unwillingness leads to the fear of uncertainty.
7) Questioning this fear, leads to new knowledge.
8) Adhering to the idea of only kings, etc., being tragic heroes, negates the universality of the tragedy.
9) Indeed, the fear of uncertainty is more prevalent today than ever within the common man.
10) The ultimate destruction of the tragic hero, at first indicates something wrong with the world, which becomes a new morality in dealing with this unfairness.
11) Tragedy enlightens us, insofar as it highlights unfairness; and this is significant for the common man.
12) Our lack of tragedy may come from views which explain our actions as purely coming from the mind.
13) If instead, only society is to blame, then the character involved would be so pure as to be unbelievable – the tragic hero must have both these things.
14) The need of a man to truly realise himself is the only unalterable thing, everything else must be questioned.
15) The tenacity involved in securing one’s rightful place in the world, means a character gains “size”, the stature previously mistaken for kingly nobility.
16) Tragedy is therefore not pessimistic but optimistic, in that it strives to find the best of humanity.
17) The tragic hero represents the unconquerable spirit of man to achieve his potential, despite all the obstacles; the universality of this striving make tragedies perfect for the common man.

At the end of the session, we watched the ending of the film Titanic with reference to four of the characters (Cal, Jack, Cpn Smith and Murdoch), then discussed which of these were tragic heroes and why.