The class began with us trying to differentiate between something being exotic and something being different. While it was just a matter of how each individual looked at it here are some ideas that we came up with:
EXOTIC:

-refers to something foreign
-different but with some intrigue
-used to attract or appeal to someone e.g.
-could indicate something being brought over from a abroad, so it's exotic to its new surroundings (e.g. a fruit or parrot)
-could also be used negatively i.e with Sarah Bartman who was exhibited as a freak attraction during the 19th century due to her African descent and her "exoticness"

Mr Sadgrove then higlighted to us that this ties into the way that Othello, "the Moor" may pervcieve himself or the way others may percieve him, is he exotic? is he different? do either of these have negative or positive implications?
Act 1, Scene 2...
We were then divided into sets of "Brobantio's" and "Othello's" and we were given the task to use the play to quote lines most relevant in revealing Othello's character.
After making our lists we were put into groups with one Othello and a few Brabantio's. The Brabantio's of the group were to surround the Othello of the group and use quotes from the text to accuse him while also trying to mirror the tone that Brabantio would use to accuse him with, meanwhile the Othello of the group had to stand in the middle of the group and respond to Brabantio's dialogue with quotes from the play actually said by Othello and also try and reflect the tone that Othello would use for these lines.

An example of these exchanges: 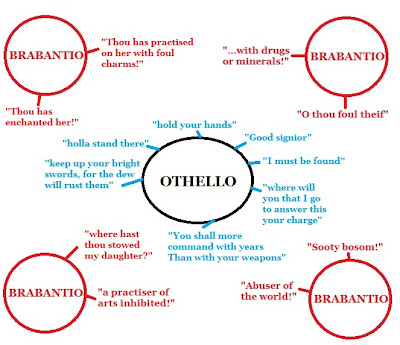 -We found that while Brabantio was attacking Othello and name calling him in public, Othello's responses were always very calm and confident.
-His ability to manage the situation and use the power of words to create tranquilty and order contrasts greatly to the impression we are given of him, as a bad leader, by Iago in Act 1, Scene 1.

Act 1, Scene 3...
We were introuduced to the term DICHOTEMY when one thing is split in two. This was significant to the next scene we were about to read as it is a split between the public and personal lives of both Brabantio and Othello (the matter of Desdemona and matters of the state).

While reading through this scene we focused on a few things:

-Othello's importance to the Duke

-The fact that Othello is refered to as "the valiant Moor" by a Senator, valiant suggests that Othello's bravery is recognised and he is somewhat respected meanwhile Moor suggests that this word has almost become Othello's identity and that it used to take away from the compliment to his bravery.

-We focused on Othello's speech after he is told to speak for himself regarding the charges against him, we sat in a circle as a class and covered the speech with each person reading till the next punctuation mark. The impact of the pauses and the intensity of Othello's words were illuminated by this activity, we concluded that more depth is added to Othello's character through this speech as his genuine nature and humbility come through for example he says "Rude am I in my speech". Also we imagined Othello to say lines such as "I won his daughter" with power and emotion through the help of the Iambic Pentameter which would really stress the word "won".

-Also, we zoomed further into the linguistic devices used by Shakespeare when studying another of Othello's speeches later on in the scene. In order to better understand Othello's life and just how exotic and different his life is we concentrated on the aspects of his life that he lists. We worked in groups to act out freeze frames for atleast six of the things he mentions he has faced in this speech.

I think I've covered everything we did :)
Samiha